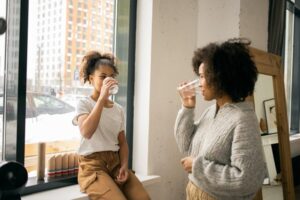 If you have children, you want to do all you can to ensure they grow up healthy and happy. Supporting them in making healthy life choices at a young age can help them thrive now and in the future. With that said, getting your children to think about health can be tough. Luckily, there are small steps you can take to make it happen. These tips from Professional Mom can get you started in creating a healthier home for your children.

Encourage little ones to eat healthy by involving them in your meal preparation. There are plenty of easy-to-prepare healthy family recipes like a white bean casserole or veggie lasagna. Learning cooking can help little ones in the future too. As young adults living on their own one day, they’ll be well equipped to care for themselves. Plus, you can benefit from the extra help in the kitchen.

Exercise is another important component of a healthy lifestyle. Make physical activity a part of your family’s everyday routine. There are plenty of family-friendly activities that everyone can enjoy. Examples include hula-hooping, dancing, playing tag, or taking the dog for a walk. As kids get older, encourage them to take part in school sports. This is a great way to stay fit while also making friends. It’s always a good idea to get outside and exercise as much as possible, and you can set an example in this regard as well. The benefits of being in the fresh air and getting in some sunlight when possible are numerous, and it can be as simple as playing in the backyard or taking a walk in the neighborhood or at a nearby park. If you’re fortunate enough to live in an area with a high Walk Score, which measures a locality’s walkability, all the better!

Mental health is just as important as physical health, whatever your age. If your child struggles with issues like anxiety or stress, find a mental health service online to help them. Online therapy is affordable and secure, and the time it takes for your doctor’s appointment is minimal. Many therapists include a free consultation to ensure they’re an appropriate fit for your child.

END_OF_DOCUMENT_TOKEN_TO_BE_REPLACED

I’m going to start the New Year off with a subject that, in my opinion, has been avoided of late. The subject of Hell. The place, and it is a place, the purpose, the problem, and the person.

When I say, of late, I mean that for the past few years I’ve noticed a Heavenly Gospel, which is good, as there is a Heaven also, but it seems to me that the subject of Hell has been left out of the conversation (sermons) in the last few years.

It is only appropriate to discuss Hell because when we speak of the Gospel of Jesus Christ, His whole reason for coming to Earth was to save humanity from Death and Hell.

So, let’s start with “the place.” It is a place of eternal suffering. When you die, you either go to Heaven or Hell, there is no “in between” or limbo, as is thought in some religions. You live, you die. It seems trite or disrespectful, but it is the truth. Hell is described in the Bible as “a furnace of fire; there shall be wailing and gnashing of teeth…” Among other descriptive words found in scripture, it is a horrible place, separated from the God who created us.

There is a purpose for Hell. It was created by God for the Devil and his angels. As time has no limits with God, before the Man was on Earth, the angels rebelled and Lucifer, God’s favorite angel decided he could be God and was remanded to Hell. That he has some power before the end times is not for me to speculate, however, when the end of the world as we know it happens, and it will happen, the Devil and his followers will be cast “into the Lake of Fire” for eternity.

END_OF_DOCUMENT_TOKEN_TO_BE_REPLACED

At the time, I was not as close to my Savior as I should have been, however, within a year of marriage, I began to miss going to church and that started a whole realization that Jesus is Lord of ALL. I had even said (didn’t tell Joe) that I didn’t want to have children, but this “opening all the closets of my heart” started a whole new direction in my life. I gave my whole heart to Jesus and asked Him what HE wanted for my life.

The trajectory of my life changed immediately as all my goals and deepest wants were about being pleasing to God.  Within a few months, I was impressed by the Holy Spirit to quit my job with a local endodontist, get off birth control pills and in what I now call, getting ready for God’s plan, began to get more involved in Bible Studies, church events, and used my home time to listen to radio programs with awesome Bible scholars like J. Vernon McGee, and others who prepared me for the road ahead.

END_OF_DOCUMENT_TOKEN_TO_BE_REPLACED

A note from Professional Mom: Escape Rooms are “the thing” this year!  How about a discounted download of a fun Christmas activity for a home party or church gathering. Thank you “Teach Sunday School”!

Don’t let Jesus take a backseat to Santa this Christmas.

Do your kids know the real reason we celebrate Christmas?

We designed a fun little game you can print out and play to reinforce the 4 key elements of the Nativity story.

You can print it out here.